Here is a list of concerts to be performed in St. Mary's Church during May 1974. In the 1960's and 1970's we arranged many music festivals. These, over the years, became very popular and attracted nationally known musicians of the day such as Kenny Ball and his Jazzmen as can be seen here.

Once again in 1978 there was a Festival in Rolleston. On Friday 12 May there was a dance with Alex Welsh and his Band along with The Mike Jackson Sound. 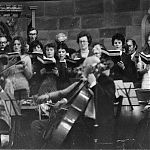 In 1976, the society celebrated the 10th Anniversary of the Rolleston Music Festivals with a special concert in the Priory Church of St. Mary in Tutbury. The society was fortunate in securing the return of the Handelian Orchestra which was formed in 1968 to accompany oratorio performances, and it contained many well-known Midland’s musicians. The leader, Bella Holt was for many years a permanent member of the BBC Midland Orchestra. On the Orchestra’s first visit to the Rolleston Festival in 1972, it was conducted by Harold Gray who was the associate conductor of the City of Birmingham Symphony Orchestra. 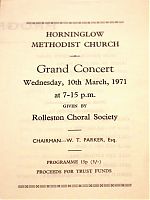 On 10th March 1971 the Choral Society performed a Grand Concert in the Methodist Chapel in Horninglow.