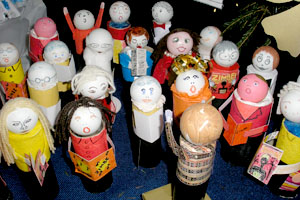 Once again the Society was invited to take part in the village's Advent festival at St Mary's Church, which this year was entitled “Light in Darkness”. A tree was the centrepiece, but the rest was up to each group. Ever-resourceful,  we decided to make a “mini-choir” - consisting basically of toilet rolls and ping-pong balls. Considering that very few of us are modellers, we came up with some imaginative results! Several of the singers were just about recognisable, including our MD Simon Lesley and accompanist Nick Waller.  The display was greatly enjoyed and appreciated by scores of visitors, and it helped raised £2,500 towards church funds.

We put on two concerts over Christmas, both with a “traditional” theme. For the first, at St Mary's Church on 12th December, we were joined once again by children from John of Rolleston Primary School, who lent an extra touch of energy and magic. A week later, on the 19th, we had a very good attendance at the Methodist Chapel for a programme that included some seasonal readings. The two concerts rounded off an exceptionally adventurous and successful year for the Society.